The Delaware River has had a long history of hosting steamboats, beginning with the very first steamer—John Fitch’s boat of 1787. Although Fitch operated three different steamboats on the Delaware River, including one that ran scheduled service to Burlington, America was not yet ready for steam-powered vessels. Finally, Robert Fulton introduced his steamer CLERMONT in 1807 and the United States began to awaken from its agrarian lifestyle and recognized the potentiality of steam and its attendant mechanical applications.

By the second decade of the nineteenth century, the Stevens family operated steamboats on both the Hudson and the Delaware as part of a through route between New York and Philadelphia. Steamers transported passengers from New York to South Amboy, where they boarded stagecoaches for the trip to Bordentown, and then transferred to river steamer for the trip to Philadelphia. 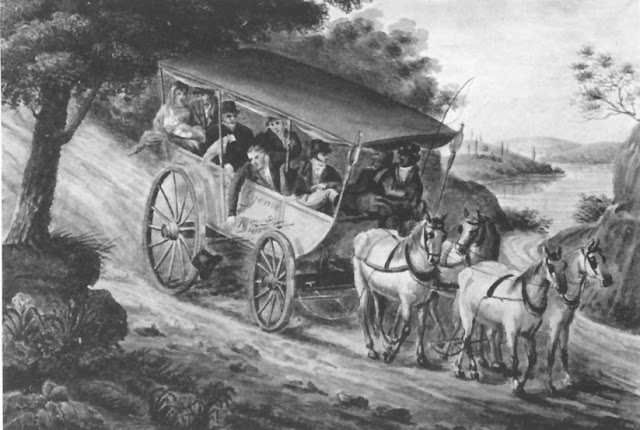 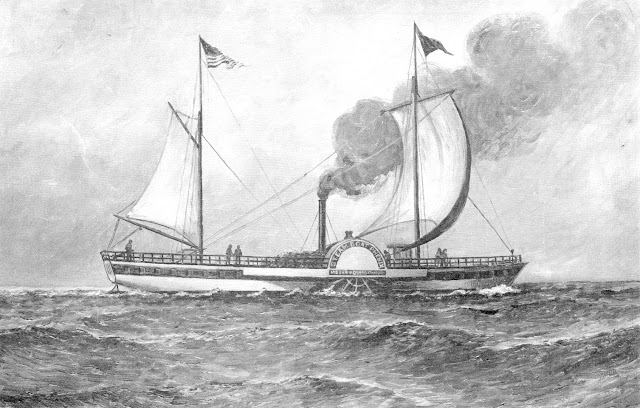 When the Stevens family constructed the Camden & Amboy Railroad to supplant the stage operation, the family still used steamboats on both rivers. 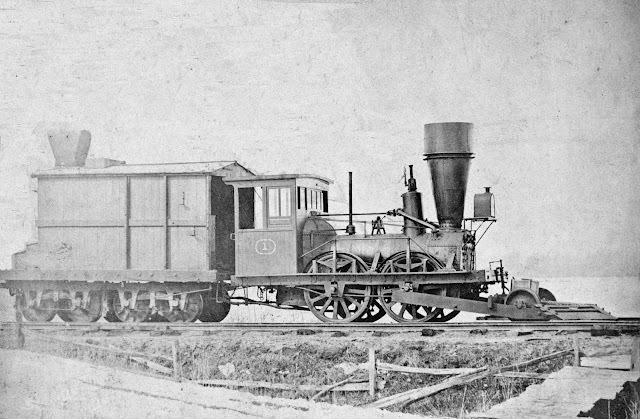 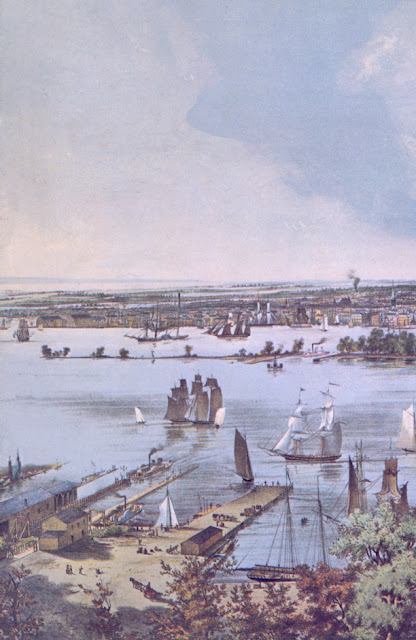 Beginning in the 1850s, Capt. Jonathan Cone acquired a large fleet of passenger and cargo steamers and his operations soon became the pride of the Upper Delaware, succeeding the Stevens Family’s Union Line. Initially, Cone employed the steamer THOMAS A. MORGAN for his Upper Delaware River Transportation Company’s passenger trips. In 1857, however, he introduced the iron-hulled JOHN A. WARNER. 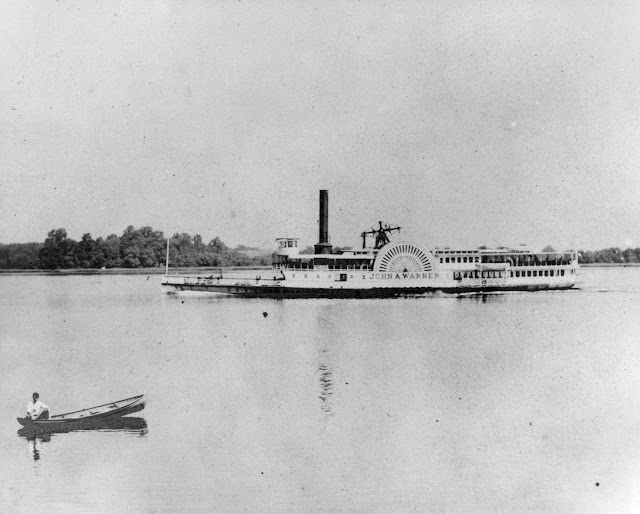 Constructed in Wilmington, Delaware at the shipyard of Harlan & Hollingsworth, the WARNER was the swiftest vessel to ever steam on the Delaware River. During the Civil War, the federal government pressed the WARNER into service and brought many wounded and dying Union soldiers from southern battles to the federal hospital in Beverly, New Jersey.

Capt. Henry Crawford, an old Union Line pilot, attempted to break Cone’s monopoly on Upper Delaware service by having the steamer TWILIGHT built by the Harlan & Hollingsworth yard in 1868. 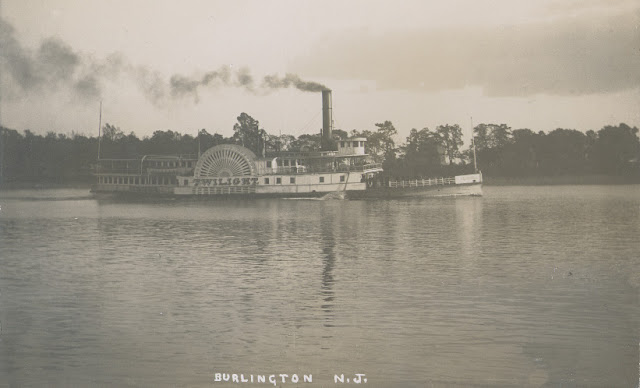 Crawford maintained a Philadelphia –Trenton schedule using the TWILIGHT. Steamer operations to Trenton always proved perilous due to the Perriwig shoal just above Bordentown. As a result, the tide chart always governed the steamer schedules to assure enough water covered the shoal to prevent running aground. Crawford’s service had little impact on Captain Cone’s operations and profits.

In the Centennial year of 1876, Captain Cone ordered the steamer COLUMBIA from Harlan & Hollingsworth. Like the JOHN A. WARNER, the COLUMBIA also featured an iron hull. 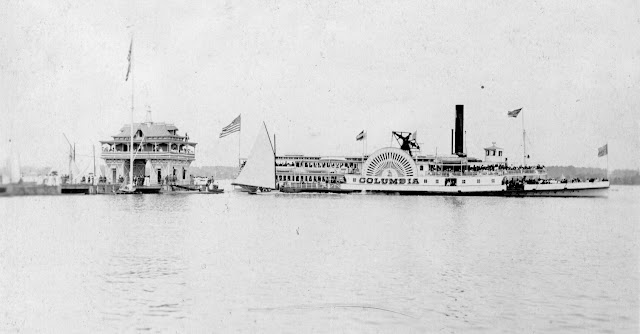 
The COLUMBIA featured more enclosed space than any other steamboat on the river and most people considered her to be the handsomest boat that ever plied the waters of the Upper Delaware. She became the desire of every moonlight cruise and always carried the best orchestra. The crowds on the COLUMBIA usually comprised a better social quality than other steamboats. The crew always kept her decks clean, the stools stacked in an orderly array, the interior paint always washed, the carpet brushed, the furniture dusted and the plush easy chairs and wide settees never had frayed upholstery. Amenities onboard included big comfortable rockers for grandma or grandpa, a large mirror at the head of the grand stairs, and the congeniality of the old, white-capped black stewardess, who looked after the welfare of the mothers and their babies. The onboard piano was always in tune and as a special attraction on Wednesdays, the steamboat company employed a blind man from Bristol named Summerfield to play music on the COLUMBIA.
Captain Cone became the COLUMBIA’s first master. After the press of business forced Cone to retire from the wheelhouse to the office, George C. Tyler assumed command of this fine boat. Tyler piloted the steamer on her usual circuit between Bristol and Philadelphia, making stops at a number of wharves—Burlington, Beverly, Andalusia, Delanco (occasionally), Torresdale, Riverton, and Tacony/Bridesburg. 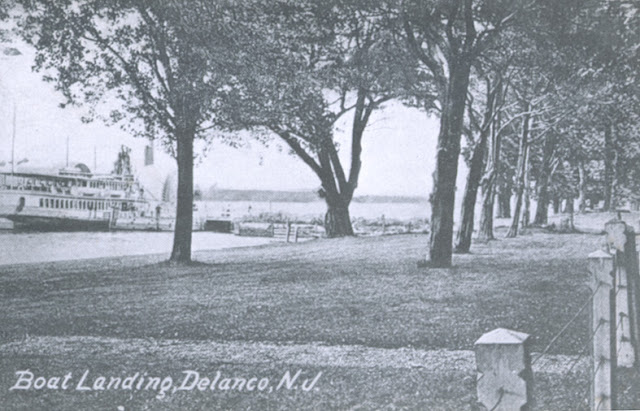 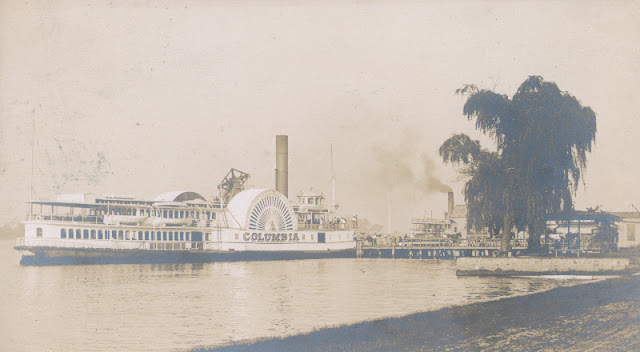 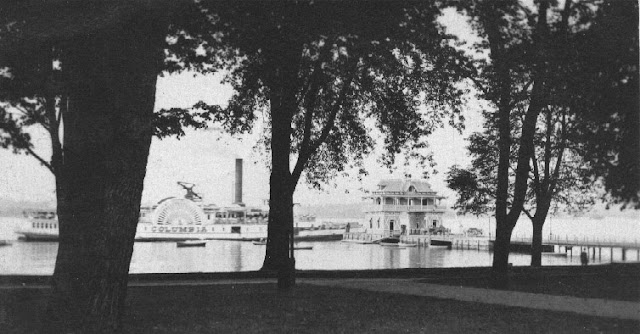 Although reserved almost exclusively for the passenger and excursion trade, the COLUMBIA would carry a small amount of farm truck and express. The usual schedule called for two round-trips for the COLUMBIA between Trenton and Philadelphia during the week, with three circuits being completed on Sundays. The fare for a regularly scheduled trip was $0.25 one-way or $0.40 for a round-trip to Bristol or $0.50 to Trenton. The boat maintained a special summer schedule from June 1st to September 15th. Beginning in 1895, the COLUMBIA terminated upriver at Bristol, with the remainder of the trip to the state capital handled by the new steel steamer TRENTON. The COLUMBIA carried a full orchestra onboard for its daily 2 p.m. trip. 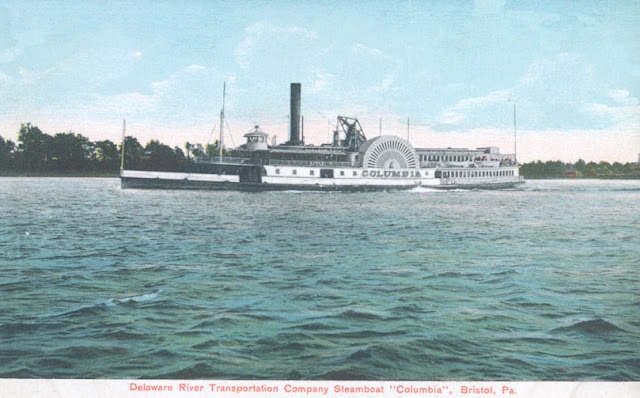 By 1892, the Upper Delaware River Transportation Company owned and operated all three river steamers mentioned in this monograph: the COLUMBIA, JOHN A. WARNER, and TWILIGHT. Under a common management, the three boats quickly and affectionately became known as The Three Musketeers of the Upper Delaware by those who lived along the riverbank. Many a fight ensued at the landings between the young men that hung around these wharves. Known as “wharf rats,” these boys would gladly suffer a shiner or torn shirt in staunch defense of their favorite Musketeer. A lad was not accepted into the ranks of the wharf rats until they could distinguish between the boat whistles from at least a mile away and name the steamer before it arrived. 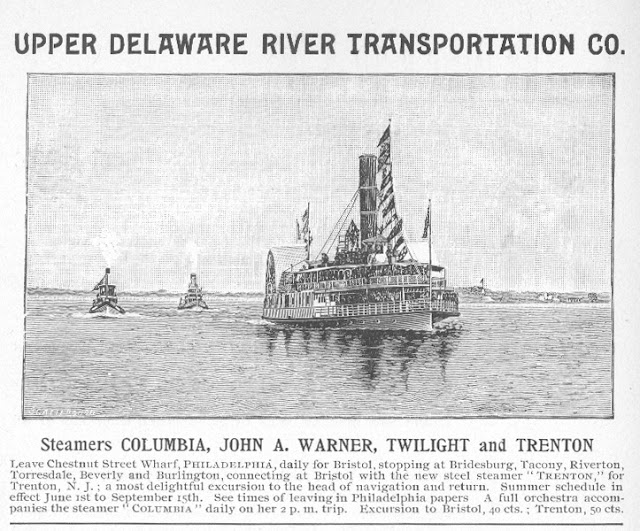 The COLUMBIA became the queen of the excursion trade, operating innumerable trips to the various picnic groves along the river shore, moonlight dance cruises and, beginning at the turn of the twentieth century, to the many amusement parks that dotted the Delaware River shore. She sailed proudly with fluttering pennants strung from stem to stern while loaded with Sunday School groups on their way to the temperance picnic grounds at National Park.
Sometimes these outings would require the services of more than one boat due to the large crowds. The amusement parks that made the excursion trade so lively included (from north to south): Island Park on Burlington Island; Washington Park on the Delaware (West Deptford); Lincoln Park (Billingsport); and Riverview Beach (Pennsville). The latter had the distinction of being the last amusement park to be served by steamboat on the Delaware River. 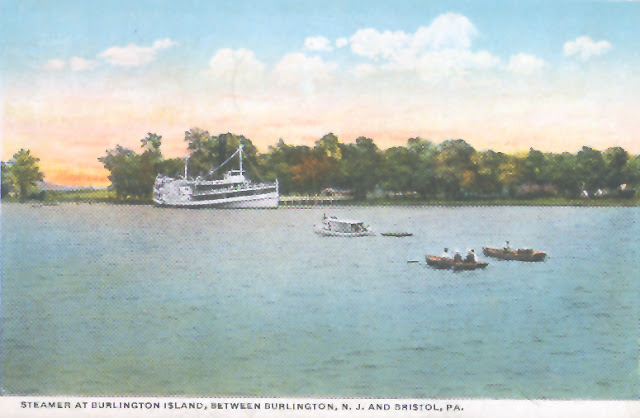 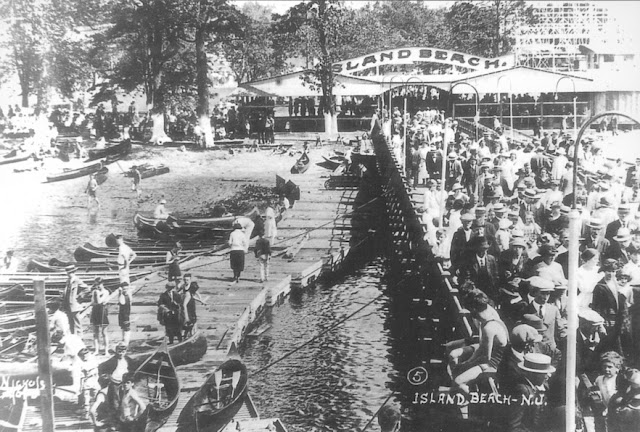 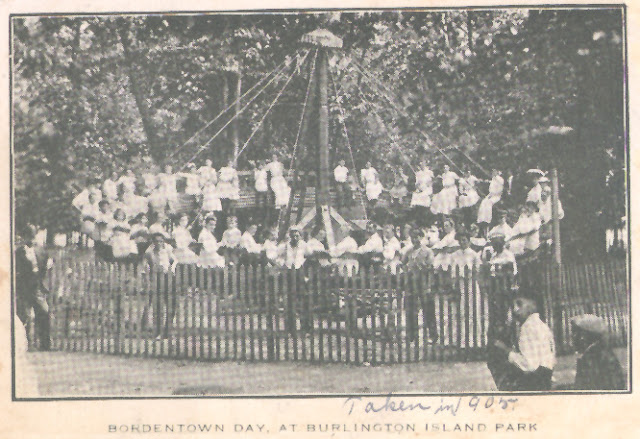 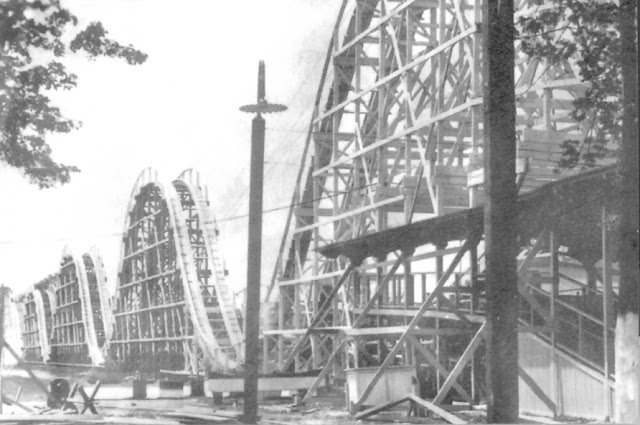 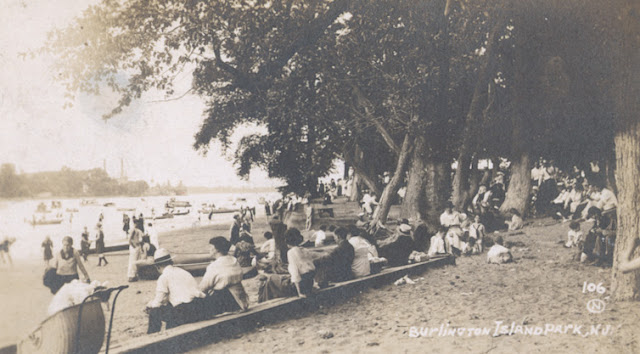 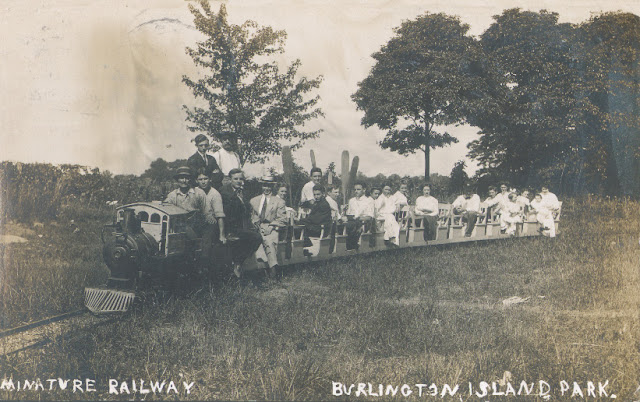 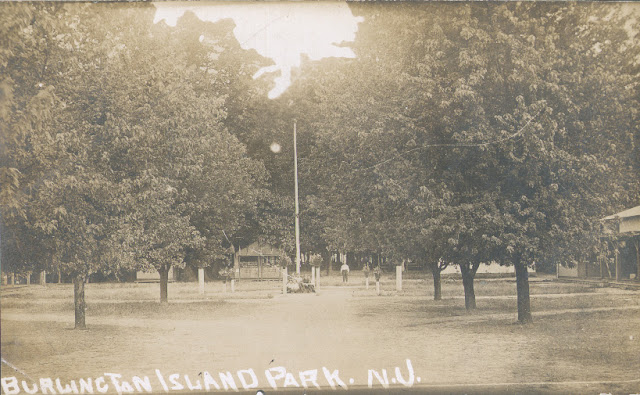 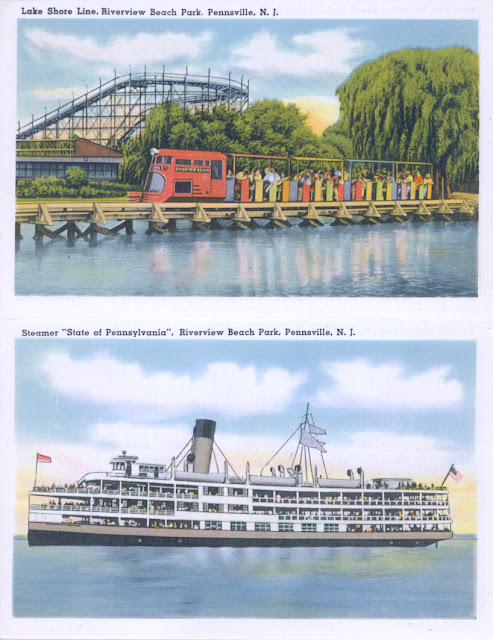 Captain Cone died at the turn of the twentieth century and his heirs sold the company and its boats, including The Three Musketeers. The new management reorganized the firm as the Delaware River Navigation Company. 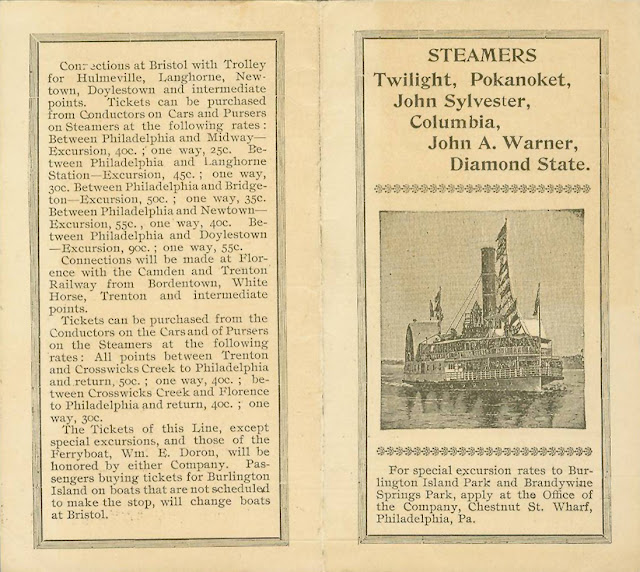 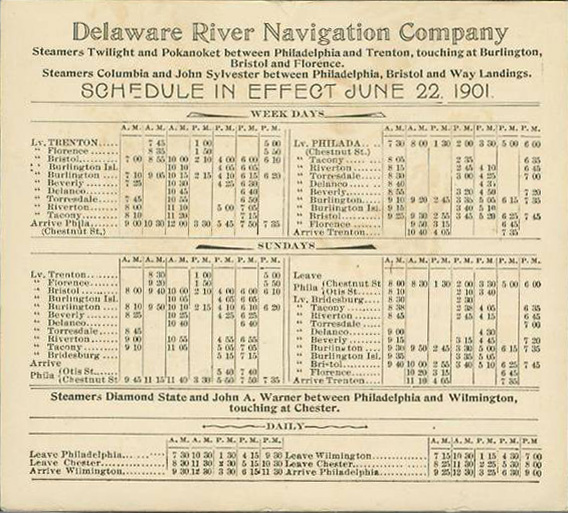 In 1905, the new owners renamed the JOHN A. WARNER and she became the BURLINGTON. 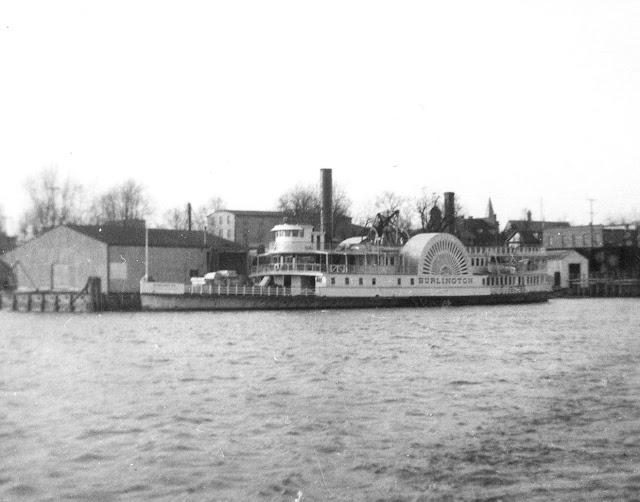 But the passenger business on the Delaware River entered a downward spiral and the excursion trade could not sustain the company’s financial demands. The railroads, trolleys, and finally the exploding popularity of the automobile had all robbed the steamboats of potential fares. The summer of 1916 proved to be the final season of service for the COLUMBIA AND TWILIGHT as the Delaware River Navigation Company slipped into receivership. 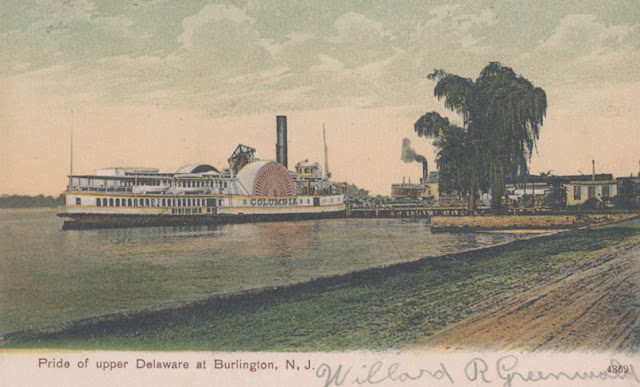 The third Musketeer, the JOHN A. WARNER, a.k.a. BURLINGTON, had run aground on the Perriwig Bar in August 1911. The company left her where she grounded, her services no longer required and the recovery and repair bills too steep for her owner’s dwindling coffers. 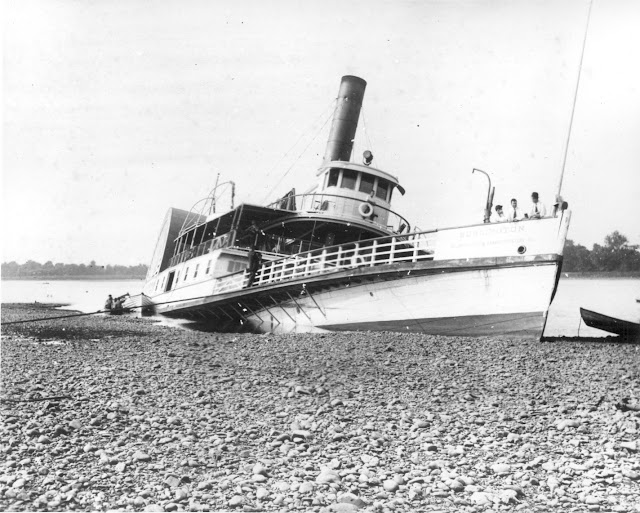 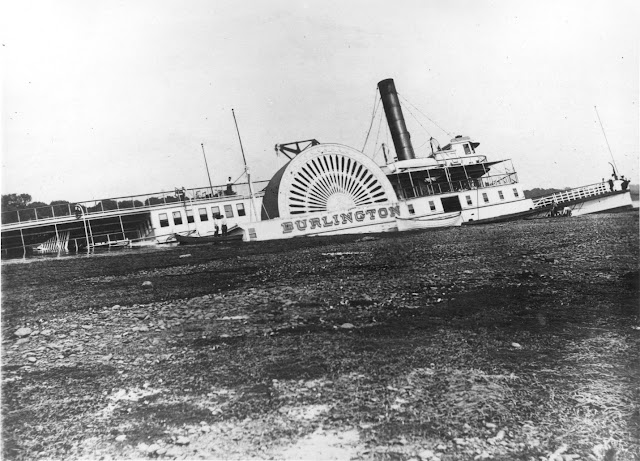 After several months of ravaging by wind and tide, the Army Corps of Engineers declared her a hazard to navigation and stripped her hull of all superstructure and machinery. Her charcoal-iron hull remains extant today on the Pennsylvania shore of the river above the mouth of Crosswicks Creek and the Philadelphia Maritime Museum—now the Independence Seaport Museum—has conducted several archaeological surveys on the hull.

After being withdrawn from service, the company’s receiver tied up the TWILIGHT and COLUMBIA in the Camden Shipbuilding Company’s yard at Coopers Point, Camden. The COLUMBIA underwent an auction in 1918 and served as a floating boarding house for World War I dock workers while moored at Philadelphia’s Christian Street wharf. She did suffer some damage by fire during her wartime stationary service. The TWILIGHT remained at Cooper’s Point and the COLUMBIA returned there after World War I ended. A few years later, the TWILIGHT was sold and had just undergone a complete reconstruction in 1923 for new owners, when a disastrous fire swept through the Coopers Point yard and the TWILIGHT suffered total destruction. The COLUMBIA, tied up nearby, suffered some fire damage, but escaped complete burning.

Workmen at the shipyard repaired the fire damage on the COLUMBIA and she again began running excursions for new owners by 1925, only to be returned to Cooper’s Point after a year or two when expenses exceeded the ticket proceeds. Five years later, an unattributed newspaper clipping dated June 13, 1930 provides the following information:

The old steamer, “Columbia”, for many years a familiar sight on the upper Delaware River, where she plied between Philadelphia and Trenton, has been reconditioned at the Kensington Shipyard, Philadelphia, after being tied up at Cooper’s Point, Camden, for several years. According to reports the vessel, which has been renamed “Franklin”, will soon be placed in service as an excursion boat running between Philadelphia and Deamer’s Beach, new Newcastle, Delaware. [sic]

Owned by the Franklin Transportation Company, the COLUMBIA, a.k.a. FRANKLIN, only operated to Deamer’s Beach during the summer season of 1930. The new owners laid her up at a South Philadelphia pier until the Kensington Ship & Drydock Company purchased the steamer at auction in 1932 for $1,500.00 to satisfy their claims against the boat’s owners. On October 5, 1932, before the Kensington Shipyard management had the opportunity to move her, fire swept through the COLUMBIA, causing total devastation. Charles Haskell, a mate on the boat since 1910, served as the watchman and lived aboard the vessel. The firemen responding to the alarm call rescued the septuagenarian Mr. Haskell.

This fire brought an ignoble end to the COLUMBIA, a handsome and popular river steamer and the last surviving member of the Upper Delaware River’s Three Musketeers. She is remembered today through old photographs, faded newspaper articles, and steaming through the memories of the oldest of area residents. 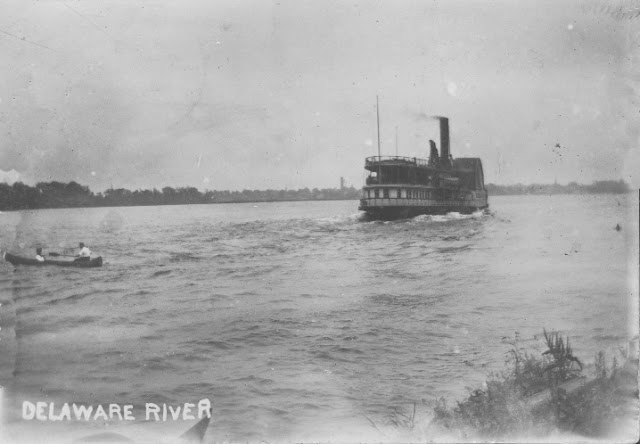