A History of Pleasant Mills

What follows is a history of the Pleasant Mills complex that I thought I would share with all and any interested in the property. For those seeking even more minutiae about the place, I highly recommend you consult the “Pleasant Mills” chapter of Arthur D. Pierce’s Iron in the Pines.

The mill seat at Pleasant Mills has served a colonial sawmill; a 3,000-spindle cotton mill, constructed in 1822 by Benjamin Richards and his three partners: William Lippincott, Edward Yorke, and Benjamin Sooy; and a paper mill beginning in 1861 after a great conflagration destroyed the cotton mill during 1855. The partnership consisting of Robert M. Pierce, Benjamin F. Holbrook, John McNeil, and Thomas Irving acquired the cotton mill property from Lewis Henry Richards in February 1860 and constructed a paper mill at the site of the cotton factory. Following some court action against Pierce and Holbrook, these two names disappeared from the firm and the two men sold any remaining interest in the paper mill to John W. Farrell in August 1862. By January 1864, the firm, now styled as McNeil, Irving, and Farrell, advertised for raw materials to meet demand for its products during the Civil War:


A letter from a Pleasant Mills inhabitant to the editor of the South Jersey Republican dated 18 January 1864, notes that “McNeil, Irving & Co., are also putting in 30 acres [of cranberries].” The letter writer also states that “T. Henderson, Esq., has a fine vessel of about 500 tons nearly ready to launch. He is also doing a heavy business in the manufacture of coal, and lumber, employing some 80 or 100 men.” The scribe concludes his letter by reporting, “McNeil, Irving & Co.’s Mills are making one ton of paper per day, having two sets of hands, and running day and night, they use 10 tons of old manilla rope per week, and during the last two years have made the largest portion of the Cartridge paper used by the Government. The amount of tax paid by them to the U.S. on their manufactures for the last three months, amount to the snug sum of $450, being more we believe than that paid by all others in Atlantic County.” 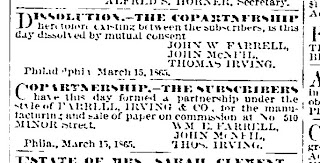 By June of the same year, he had bought out the interest of McNeil and Irving and became the sole proprietor of the paper mill. Desirous of more capital in the face of the financial malaise that followed the Civil War, William E. Farrell, in concert with William Bargh, James M. Scovel, Peter L. Voorhees, P.C. Brinck, obtained an incorporation act for the Nescochague Manufacturing Company from the New Jersey State Legislature in March 1866. This corporation would continue to operate the paper mill for the ensuing 30 years or more. 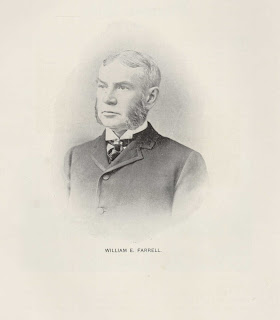 A squib in the 2 March 1875 edition of the Trenton State Gazette noted:

Pleasant Mills, Atlantic county, is a great paper manufacturing village. A new mill for the manufacture of I.X.L. water proof paper will shortly be started. Manilla papers and rag and straw paper are also made here on an extensive scale.

A terrible hurricane struck southern New Jersey in late October 1878 and during the height of the storm, at 1:00 a.m. on 23 October, the paper mill burned down. Being a shrewd man, Farrell had the mill fully insured and used the proceeds of that policy in part to reconstruct the mill with new and improved machinery, capable of producing 4000 pounds of paper daily. While the Nescochague Manufacturing Company remained an active corporation, Farrell needed a fresh infusion of capital to complete the reconstruction, so he incorporated the Pleasant Mills Paper Company on 5 May 1880. The corporate charter authorized the issuance of $100,000 in stock. An amendment dated 13 April 1881 boosted the capital stock to $150,000. Farrell served as president of the new company and Herman Hoopes, of West Chester, Pennsylvania, filled the position of secretary. Ernest Hexamer completed a fire insurance survey of the new mill on 9 May 1881 and the steam lithographic press of Frederick Bourquin produced prints of the survey, which presents a plan view, a birds-eye view, and a complete description of the works:

To prevent a repeat of the fire that destroyed the mill, the company constructed a water tank and installed two hydrants, as well as place fire buckets around the plant in strategic locations.

Just as the paper business at Pleasant Mills had become profitable, William Farrell became ill during 1892. Dr. Thomas Reed, of Atlantic City, later testified that he attended to Farrell for heat prostration during July and August of that year. He also diagnosed the patient with aphasia and paresis. In response to questions, Farrell could not formulate sentences, but answered monosyllabically. The patient recovered sufficiently to marry Celia Hyslop of Troy, New York. His joy was short-lived, however, and he died less than a year later on 9 March 1893, the date of 55th birthday. He had drawn up a new Last Will and Testament, leaving all of his worldly possessions, both real and personal, to his new wife. His former heirs, thinking that Celia exercised undue influence on her much older husband, brought suit against the estate. The litigation continued for five years before the court ruled in favor of the widow. Meanwhile, she had remarried to Lewis M. Cresse, another man of great means. Celia appointed her new husband as president of the paper mill company, who hired Alexander J. McKeone as the new plant manager. In 1901, McKeone embarked on a major project to update the mill and its equipment. At that time, the paper mill employed 25 people. By August 1914, Lewis Cresse’s health had deteriorated rapidly and he committed suicide by shooting himself. His widow decided to close the paper mill as she had no managerial experience.

Two years later, in 1916, McKeone acquired the mill and its 300-plus acres from Mrs. Cresse. He sought to reopen the mill. A short article in The Philadelphia Inquirer noted,

JUTE MILL TO REOPEN
Special to The Inquirer
ELWOOD, N.J., Jan. 9.—Investigators are considering the reopening of the mill of the Pleasant Mills Paper Company, located at Pleasant Mills, on an arm of the Mullica River, five miles from this station. The mill has been closed since the beginning of the European war shut off the constant supply of jute, when owners declared the mill could not be profitably run further. Heavy papers for wrapping, sandpaper, bases, etc., are made from rope, jute and wood pulp.

But the mill failed to open and McKeone sold a controlling interest in the mill to the Norristown Magnesia & Asbestos Company. The new owners installed the necessary equipment to produce asbestos in sheet form. The Norristown-based company operated the mill for several years, but found production there to be unprofitable. They then attempted to go back to papermaking, producing color stock for theatre tickets, but this, too failed. The mill closed for the last time in April 1925 and the owners sold the equipment to scrap dealers. The mill and its attendant property passed through the hands of two development companies. The second developer, the McCorkle-Pleasant Mills Company, sold the mill in October 1948 to Raymond and Mary Baker (nee McKeone). The deed of conveyance contained a restrictive covenant:

The buildings now erected upon the said Land…shall be preserved and kept in their present artistic appearance and such repairs shall be made thereto as shall make said buildings usable for the purpose hereinafter mentioned…The said lands and premises shall be used only as an art center for the promotion and teaching of art, crafts and the manufacture and sale of art craft products…provided the tenant or tenants shall have the right to live and make their home in said buildings.

With that in mind, the Bakers used the old mill as an art gallery, but then sold the property in January 1952 to Mrs. Ada Fenno, of Swarthmore, Pennsylvania, who desired to convert the mill into a theatre. Possessing the necessary financial means to accomplish her goal, the Mill Playhouse opened for its first play on 3 July 1953, when the actors presented three plays by Noel Coward: “Family Album;” “Ways and Means;” and “Red Peppers.” The actor troupe included a teenage Tony Perkins; Efrem Zimbalist Jr. also appeared on stage at the Mill playhouse. A choral group from Hammonton actually preceded the play when they offered a recital at the mill in 1952. Meanwhile, Fenno relocated her residence to the mill, occupying the former office and supply room at the south end of the mill complex. The theatre closed in 1957, but not before it had incurred a loss of $80,000. Ada Fenno remained tenured in the property until her death on 24 June 1975. In her Last Will and Testament, she attempted to devise the old paper mill to the City of Hammonton, but they refused to accept the gift with the provisos and restrictions on the property. Her second choice was the charity known as Seeing Eye, Inc. They, too, refused the gift. Finally her executors, The Bank of New Jersey, sold the mill and its property to the Pax Amicus Foundation, a theatre group headquartered in Flanders, New Jersey. This foundation still owns the property today in 2010 and has leased the mill to a number of caretakers since they gained ownership.
Posted by Jerseyman at 11:59 PM