Extracted from Village Improvement, a publication of the Moorestown Improvement Association. Vol. I, No. 10, September 1905, pages 2-3.

Camp Kenilworth is located on Kenilworth Lake on the edge of the pines, about three miles south of Marlton. There is, perhaps, no more desolate spot in this section of New Jersey, yet it possesses for the lover of nature a charm that is almost indescribable.

I recently spent two weeks in the camp with my family, and I can say with all truthfulness that I never spent a more profitable or more enjoyable vacation. To the business man whose brain is weary from the constant strain of business cares and responsibility, and to the housekeeper run down under the strain of household worries, it offers opportunities for rest and recuperation not to be found at our better-known and more popular resorts. Indeed, as modern life becomes more and more complex, it is the more necessary for us at times to avoid “the madding crowd” and seek “nature’s wilds” for rest and inspiration.

The Jersey pines have been ridiculed from time immemorial, yet they possess a beauty peculiarly their own. Perhaps a poet will arise some day to sing their praises and interpret for us their message of quiet restfulness. Seated in retrospect on the bank of Kenilworth Lake I find it difficult to describe my surroundings or to express in words my love for this spot far removed from civilization. Before me lie the quiet and peaceful waters of Kenilworth Lake, in which during the morning and evening hours are mirrored the artistic pines that fringe its borders. At the upper end of the lake “Lovers’ Retreat,” a small island on which a rustic pavilion—almost hidden by vines and shrubbery—has been erected, adds an artistic touch to the outlook. Turtle log, in the foreground, jutting out into the lake, on which not infrequently may be seen two or three immense turtles, is a point of interest to the old as well as young.

The lake is, perhaps, one-third of a mile in length, and is fed by a little stream known locally as “Back Run,” whose waiters are clarified by their long journey through the cedar swamps and pines. The lake offers many attractions to the lovers of bathing and boating, and at feeding time the elusive pike rippling the surface of the water tempts the disciple of Isaak Walton.

At sunset the lake appears in its greatest glory. Its waters sparkle with the rays of the departing sun, and the glories of the sunset, even to the perfect coloring of the clouds, are mirrored in its depths. This picture, perfect in every detail, was equaled only by a moonlight scene during my stay when the heavens, illumined by myriads of stars, were reproduced in the waters of the lake. The milky way, the big dipper, and other beautiful constellations were perfectly pictured, and occasionally a shooting star, like a flying gold-fish, dashed through the water.

The camp is located in a clump of pines on the bank of the lake. Near the water’s edge a large tent, fifty feet in diameter, serves as a pavilion, and is well supplied with comfortable chairs and hammocks. A little stream, part of the overflow of the lake, flows under one edge of the tent, and the music of the flowing water lulls us to sleep even in the daylight hours. A water-wheel, rudely built yet artistic, with its constant motion, reminds us sufficiently of the busy world outside to enable us to enjoy more fully the quietness and restfulness of our surroundings. The sleeping tents, fifteen in number, are pitched in the form of a horseshoe just back of the large tent, and within the circle thus formed a camp-fire of pine logs is built each evening.

The camp-fire is the event of the day. Around it each evening the happy campers draw their chairs, and with constant flow of jest and story and song pass the evening hours most pleasantly.

There is a fascination in a log-fire in the woods, beneath the blue canopy of heaven, which alone can be felt—it cannot be described. Long after most of the campers had retired I would sit with a few congenial spirits and enjoy its fascination. Song and story had ceased, and few words were spoken, yet there seemed to emanate from the glowing embers a spirit of fellowship which drew us together even though we were strangers to each other.

A description of the camp would be incomplete without a tribute to our jolly host, Clayton H. Brick, and to the “Kenilworth spirit.” To a large extent the one inspired the other, for our host was tireless in his efforts to promote the happiness and comfort of his guests. At times the campers lapsed into a freedom of manner and speech that would not be acceptable in the “drawing-room,” yet a spirit of brotherly kindliness and unselfishness pervaded the camp which each one of us can with profit keep with us on our return to the ”drawing-room” or business office. [end of quoted article]

Here are some views of the recreational resort that once existed at Lake Kenilworth in the Pines: 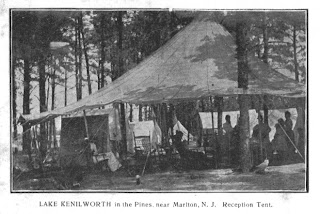 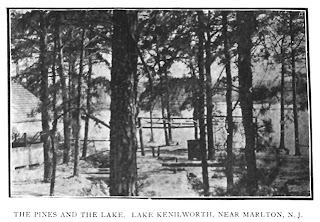 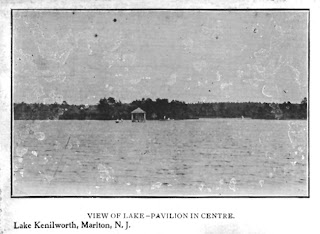 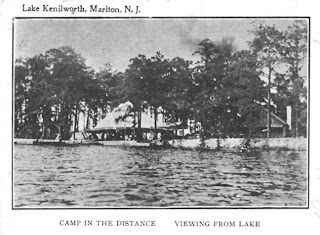 The dam the formed Kenilworth Lake became a victim of the July 2004 1,000-year storm, when massive amounts of rainfall slammed Burlington County, washing out many dams and causing widespread flooding. No effort has been made to-date to rebuild the dam and restore the lake to its original beauty.

I first became interested in Kenilworth a few years ago when I began researching antebellum African American enclaves in South Jersey. Evesham Township historian Maurice Horner, writing in his 1971 work, A History of Evesham Township, states:

Kenilworth Lake is part of the Evans tract. At an early date, a saw mill was erected there. The sawdust was dumped into the stream and carried down to Union Mill Lake. Luchas, who developed Union Mill Colony Club, uncovered this sawdust while cleaning out the lake with a bull dozer; it had been at the bottom of the lake for 150 years.

Evans allowed fugitive slaves, who had escaped from the south through the underground, to settle around Kenilworth. At one time there were 40 of these slave families. The southern slave holders would plant colored spies in the colony. After getting the necessary information, these spies would return South; then raiding parties from the South would kidnap these slaves and take them back to the slave holders.

To counteract this the colony would post lookouts, and if there was any sign of a raid, the lookouts would give the signal and the slaves could run to the woods and hide.

Evans gave these slaves a deed for their lots but these deeds were never recorded. Before he died, Evans told the slaves to give back to him their deeds. A descendant of a slave pointed out to me, “This is my land. I have nothing to show for it, and I can’t sell it. (page 11)

Indeed, if you examine some sheet maps published before the Civil War, particularly the 1860 Lake & Beers Philadelphia and Vicinity, you will find the surnames of black families living near the lake. Some names that come to mind include Worthington and Quann, but there are several others.
Posted by Jerseyman at 12:04 PM